Home World Events Why did 6 million people attend the Pope Francis ceremony in the Philippines ?

Why did 6 million people attend the Pope Francis ceremony in the Philippines ? 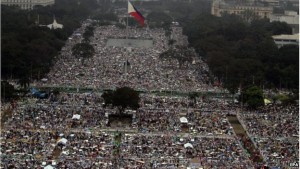 “Pope Francis has celebrated an outdoor Mass in front of unprecedented crowds in the Philippine capital Manila.

That would be a record for a papal event. About five million welcomed Pope John Paul II in Manila in 1995.

The Vatican said Pope Francis had dedicated the service in part to the victims of Typhoon Haiyan, which devastated the country in 2013.

The Mass will be the Pope’s final full day in the Philippines, where there are 80 million Catholics, concluding his six-day tour of Asia.

Millions of people have turned out to see the Pope despite the rain, as Rupert Wingfield-Hayes reports
line

Pope Francis’s visit has been seen here as a resounding success. There’s been enormous enthusiasm for the Pope and the themes he’s focused on – helping the poor, the importance of the family, and protecting the environment.”

Is the world wondering after the “beast” ?