Home Religious Liberty Will Pope Francis have a ‘brief’ papacy ?

Will Pope Francis have a ‘brief’ papacy ? 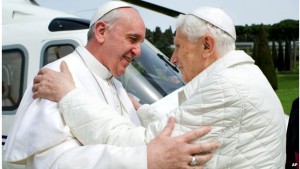 Has Pope Francis suggested that he may resign his papacy like his predecessor, rather than remain at the Vatican for life ?

The pontiff made the following comments during an interview with Mexican television, marking the second anniversary of his election.

“I have the feeling that my pontificate will be brief. Four or five years; I do not know, even two or three,” he said.

Reporters have asked Pope Francis on at least three occasions whether or not he intends to follow his predecessor Benedict XVI in retiring. On each occasion, the Pope has answered with roughly the same words.

“Do you like being Pope?” the reporter asked. “It doesn’t displease me!” the Pope replied.

Does the Pope know something that the world does not ? Will Rome introduce a new Papal leader in the near future ?

As the world wonders after the “beast” power, is the world ready for what will be an overwhelming surprise that will effect every man, woman and child on this planet ? See: