Home Religious Liberty Did the Pope suggest violence to those who make fun against another faith ?

Did the Pope suggest violence to those who make fun against another faith ? 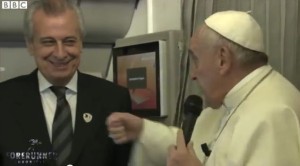 Did the Pope suggest violence to those who make fun against another faith ? Would the Pope encourage violence against those who made fun of or opposed the Roman Catholic faith ? The Pope stated,

“I believe you cannot react violently but if my good friend…said a curse word against my mother, he can expect a punch ! You cannot provoke. You cannot insult the faith of others.”

Again, “Pope Francis, who is usually calm and accommodating with his admirers, tells an overexcited follower in Mexico not be selfish after he was pulled over by his sleeves: 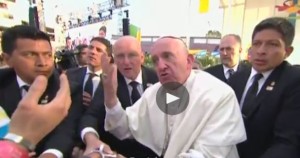 The incident happened as the pontiff prepared to greet thousands of people from a stage in the city of Morelia, as part of his six-day tour of Mexico.” – http://www.theguardian.com/world/video/2016/feb/17/pope-francis-pulled-into-crowd-by-shirt-sleeves-in-mexico-video :

See how the Pope and the Roman Catholic faith will persecute those who refuse to bow down to the man-made New World Order system when in the near future, it will enforce the “mark of the beast” – See https://ministryofhealing.org/everlasting-gospel/third-angels-message/ .